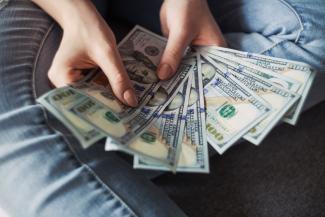 Why You Need to Uncover Your Relationship To Money

The Collaborative Women in Investment Management hosted a fireside chat this month featuring Marilyn Wechter, a psychotherapist and wealth counselor, on the topic “Women, Money, and Power: From a Psychological Perspective.” The themes presented led to reflections on the importance of coming to terms with our personal money narrative, taking responsibility for our relationship with money, and using those insights to take responsibility for our finances and make our money work for us.

There is power in understanding how we relate to money. There are parallels to the way we deal with money, with power and with intimacy. If we have insecurities in any of these areas, they will express themselves in the other areas. Do we come at these concepts from an attitude of scarcity or abundance? Are we strong and capable, or do we feel helpless and weak? Our relationship with money is often driven by fear and insecurity.

Our attitudes lie on a continuum, with either extreme expressing an insecurity and a healthy attitude found in the middle. For example, one end of the spectrum would be extremely frugal while the opposite end would be reckless spending. Neither extreme is healthy.

One self-reflection question was, “How do you conceptualize your relationship with money?” Michael Kramer of Natural Investments LLC writes, “Money reflects who we are and our individual and social priorities. But money doesn’t have any value other than what we choose to ascribe to it, and every day people make choices about whether or not to use money as a tool to create the type of reality they wish to see in their own lives and in the world. In other words, rather than being victimized by the power of money, some people see money as something to use to manifest dreams. ‘Be at peace with where I am.’”

Unpacking our psychological relationship with money is complicated. Our money beliefs and stories are formed early in life and are influenced by our gender, culture, socio-economic status, religion and education. What we learn as children can be adjusted if we examine our unconscious beliefs and rewrite our money narrative.

For women, it can be especially difficult to reverse the cultural messages we learned in childhood. We have been raised in a patriarchal society and only in my lifetime have women started to have equal access to money, credit and job security.

While women have come a long way, there is still much to do. In response to results from a 2020 U.S. Bank Women and Wealth Insights Study, Gunjan Kedia, vice chair of wealth management and investment services at U.S. Bank, concluded, “Women today have unprecedented power to use money to influence our society, and by taking a few simple steps to engage more and earlier with money, we can get there.”

Even though we know that a healthy relationship with money will improve our life, it is difficult to achieve. In explaining why women are hesitant to invest, Lindsey Taylor Wood wrote in a Fortune article titled “More money, more power: Investing helps women in the fight for gender equality,” that women sometimes feel “that engaging with and becoming educated about your finances is just one more thing to do when women are already drowning in responsibilities and carrying an unequal share of the mental load.”

Making money work for you, regardless of gender, means being conscious of the forces that drive you and taking a step back to make a choice based on what makes the most sense rather than giving in to fear.