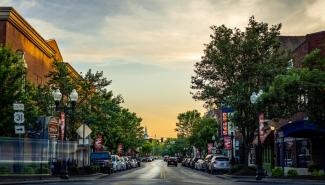 One of our country’s most beloved plays, Thornton Wilder’s ‘Our Town’, takes place in the actual town of Grover’s Corners, New Hampshire. The play has been adapted for film and television and was even presented as an opera once. It begins with a narrator, the Stage Manager saying, “This is the way we were: in our growing up and in our marrying and in our living and in our dying.”

That’s a fairly complete list of the topics we help our clients with in our planning practice. Growing, marrying, living, and even dying are likely to be more successful with some planning to keep things pointed in the right direction.

Of course, the play diverges from reality when the character Emily returns to Grover’s Corner after her death to have a conversation with the Stage Manager. She knows what has gone on during the play and asks if anyone truly understands the value of life while they live it. The Stage Manager responds, “No. The saints and poets, maybe – they do some.” In reality, such conversations can only take place in our imagination, but her question remains valid and is one we try to address with our clients.

It’s very easy to get caught up in the activities of day-to-day living. During the third act of the play, the Stage Manager takes us through a brief tour of the lives of several residents, especially those who have died. It’s this monologue that prompts Emily’s question. My understanding is that she’s asking if people were too busy living their lives to enjoy their lives.

As we work with our clients, especially our older clients, we encourage them to stop accumulating things and begin investing their resources in experiences instead. We believe those will be most easily enjoyed later, when their bodies and/or minds begin to fail them.

This line of thought reminds me of the Latin saying: Memento mori, often attributed to Plato and generally translated as ‘remember that you [have to] die’. Hopefully I’m not being too morbid, but this phrase offers an additional reminder that our lives are not infinite and planning for our possible incapacitation and eventual death simply makes sense.

Our Town concludes with Emily returning to her grave and watching impassively as her weeping husband George kneels over her. Although I could end this note with another quote from the Stage Manager, I’m going to turn that honor over to financial planning guru Benjamin Franklin instead. He wrote, “Dost thou love life? Then do not squander time, for that's the stuff life is made of.”

Time is the stuff life is made of and helping people get the most they can out of the time they’re allotted is why Peggy, Patrick, Andy, Jalene and I continue coming to work every day.