Too Much Of A Good Thing?

Growing up, we had family friends who owned a candy company. As a child, it seemed like working there would be a dream job – surrounded by candy. Better yet, the company policy allowed employees to eat all the candy they wanted. You see the trap, right? As our fellow financial planner, Wm Shakespeare once said: ‘Why then, can one desire too much of a good thing?’.

A couple of months ago I wrote an article called Beware of the FAANGs. In it, I expressed my concern that more than 100% of the return of the Standard and Poor’s 500 Index had been attributable to just a few stocks. Another way to say that is the six largest companies had increased in value while the other 494 lost value. I’d like to revisit that idea today because the editors at Standard and Poor’s have decided to add Tesla, another super performer, to the index. Is that a good thing? Well, if your aim is to identify a group of stocks that hold the most interest for investors, I’d say yes. As an investment idea – perhaps not so much.

Everyone knows that a rising tide lifts all boats, but what does that mean for investors? Well, regardless of the investment you’ve chosen, it’s likely to increase in value if the entire stock market is rising. Index fund investors are doing very well, primarily because those top six stocks are. Here’s an updated version of the chart I used in my earlier article: 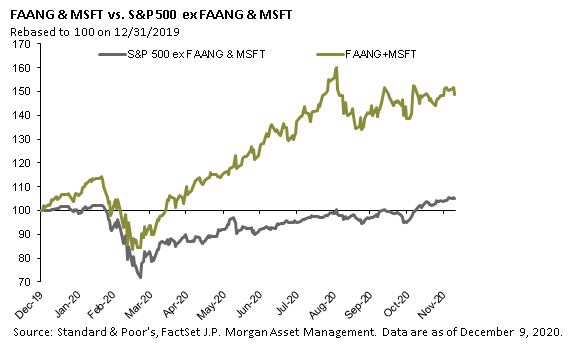 Compared to that earlier chart, things have improved for the bottom 494 stocks in the index; they are finally showing price gains for the year. Still, it’s easy to see that the top six stocks have had by far the greatest increase in value so far in 2020.

Would overall performance have been altered with Tesla’s stock in the mix? Take a look at the next chart, with Tesla factored in as if it had been part of the S&P500 all year. 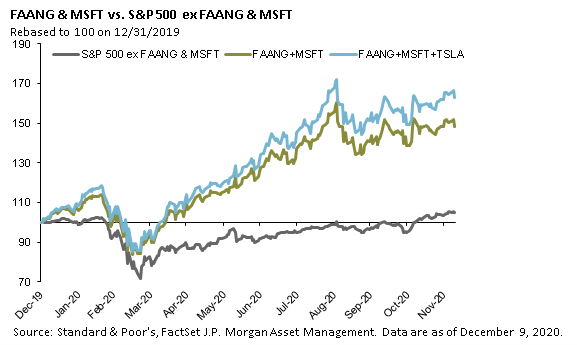 We have the same green and grey lines but the new blue one shows what adding Tesla would have meant for the index and, more importantly for index investors.

Investing in any (or all) of these large tech stocks has been a wonderful way to make money this past year. But will that remain a good strategy next year? Thinking specifically of Tesla, will it continue its history of amazing stock price increases in 2021 when competitors like VW, Volvo and Maserati all introduce new vehicles, each aiming at a specific segment of Tesla’s market? What might happen if a competitor’s product became more popular than Tesla’s? We’ve read that Tesla’s cars are wildly popular in China but is it safe to assume that it’s the number one selling electric vehicle brand there? Would you be surprised if I told you that the best seller there is actually produced by General Motors? As you can see, the effect on Tesla’s stock price has been negligible so far but I believe there’s room for investor caution.

Market indexes serve two basic purposes. First, they provide a brief summary of how the entire stock market is doing. Second, they are tracked by investment managers to provide simple choices for individual investors. We believe that a decision to add a company based on popularity is not necessarily a good investment decision. As long as those popular stocks keep their bloom, all will be well. There are many reasons to believe markets will continue to do well: vaccines are coming out, savings are at an all-time high due to reduced spending during the pandemic and people continue to have the fear of missing out. But every time that such a run-up has happened in the past, it’s been followed by a sharp correction.

Most individual investors buy mutual funds which align with their investment interests, often those with the best recent records. Instead of that, we select funds for our clients, based on the fund manager’s ability to deliver returns in specific market sectors. Of course, we aren’t always right about either the sectors or the managers but we believe our diversified approach to investing is likely to produce reasonable returns with reduced volatility over the long run. As Nobel Prize-winning economist and psychologist Daniel Kahneman once said: In a rising market, enough of your bad ideas will pay off so that you’ll never learn that you should have fewer ideas. Our investment perspective has always been a long term one, focused on making good decisions through all sorts of markets.