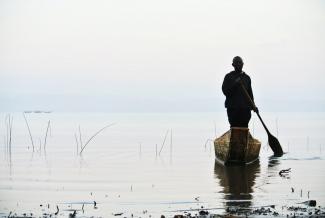 Sit Down You're Rockin' the Boat

You’d have to go back to the 1950’s and the Broadway musical Guys and Dolls to hear the original version of the song which provides today’s title but anyone can understand the concept. In a more current idiom, people are encouraged to ‘go along to get along’.

The indispensable book, Extraordinary Popular Delusions and the Madness of Crowds by Charles MacKay was first published in 1841. In addition to tracking several interesting fads, it takes us through the history of three significant asset bubbles, times when the value of an otherwise unexceptional commodity increased to an unsustainable level (at least when viewed in hindsight). Most famous was what’s become known as the Dutch Tulip Mania of the 1630’s. MacKay tells us that a perfect tulip bulb could have been traded for 12 acres of land. Some of the details are in dispute since he was writing two-hundred years after the fact but there is no question that bulbs became extraordinarily valuable and remained so for several years.

A clever graphic from bankers JPMorgan/Chase illustrates our own country’s progression through various currencies. Since England didn’t allow colonies to mint their own money, various European coins (Spanish Pieces of Eight and Dutch Guilders) were commonly used. However, Native American currencies were also used, generally pieces of shell known as wampum. Interestingly, additional such ‘coinage’ could be minted by an artisan, just as modern cryptocurrencies can be mined by computer processing.

The westward expansion of the US took place before there was a central banking system, so individual local banks issued their own currencies – valuable only to those who trusted the issuing bank. Not until 1913 was our Federal Reserve established and a true national currency circulated. Once backed by precious metals, our dollars are now backed by the ‘full faith and credit’ of our government. A hundred years later, the US dollar is considered the world’s reserve currency, the one which is held by other central banks for international transactions. It is also the currency that people turn to when they are concerned about their own government’s stability or to calm their inflation fears.

If the world generally trusts the safety of our dollar, why do digital or cryptocurrencies exist? For a generation not raised on the brick and mortar banking system, they seem a logical extension of electronic payment applications such as Venmo and Apple Pay. Why not use your digital app to transfer digital currency? However, according to Bloomberg News, some 94 percent of Bitcoin owners are holding onto their coins instead of paying with them. If they’re not spending them, what are they doing with them? They are using them as an investment vehicle, hoping to make even greater gains in the future. Clearly, Bitcoin has been a terrific investment over the past five years, going from $790 to $63,000 per coin:

Cryptocurrencies are assumed to be safe due to the underlying blockchain technology. This is a method of distributed processing in which multiple computers are used to effect each transaction. In theory, this should make such currencies tamperproof, since stealing them requires the ability to hack multiple processors simultaneously. However, notwithstanding the inherent security of the blockchain, cryptocurrency expert CipherTrace reports that hackers stole over a billion dollars’ worth during the first eight months of 2021.

The one distinguishing characteristic of the US dollar is its backing by the US government. Regardless of how many are printed, all are supported by the taxing power of the United States. It may not be an entirely fair comparison but cryptocurrencies, none of which are backed by any government, begin to resemble the tulip bulb craze of the early 1600’s. Bulbs were valuable because everyone agreed that they were. Since money was being made through their increasing value, most everyone was ‘going along to get along’ – what could go wrong? The answer, unfortunately, was that someone rocked the boat. In the words of a fairy tale from my childhood, someone eventually pointed out that the emperor had no clothes.

Will the same thing happen with cryptocurrencies? Will the value suddenly disappear? That’s a question we cannot answer but we are concerned enough about it that we discourage our friends and clients from purchasing such ‘currencies’ for any reason. Only time will tell if they represent the future of our monetary system or are simply another craze.