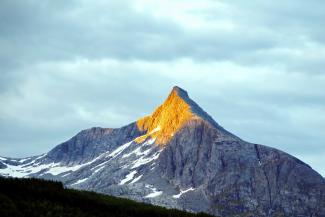 A Mountaintop Experience (with a can of Diet Coke)

On a Hawaiian vacation some years ago, Janet and I joined a group that was hiking to a World War II fort on the top of a mountain. Once there, we stopped to rest and enjoy the expansive view of the Pacific. One of our group, significantly younger and fitter than the usual tourist, had worn a large backpack for the whole climb. When we reached the summit, he offered to sell the cold sodas he had been carrying in his pack to anyone that was interested. Now, the value of a can of Diet Coke is variable, depending on the situation. In this case, he was charging $3 for a can that could have been bought for $1 from a machine or 50¢ at a discount store down at ground level. A few other hikers were annoyed at what they considered his "price-gouging". However, I was appreciative that I could quench my considerable thirst right then and enjoy a drink that I didn't have to carry up the mountain. With GameStop's stock in the news, I thought this episode might help people understand the dynamic that caused the stock's extreme price fluctuations.

The stock market is generally very efficient. It's made up of millions of professional and individual investors, all of whom have essentially the same information to guide them. Even though the information is available to all, not everyone understands or interprets it the same way. Most investors attempt to choose a stock which they believe will be a good investment, one that will go up in value over time. In market jargon, when someone purchases shares of stock, she or he is long that stock. However, there are other ways to make money in the market. One of these is selling short. Thinking back to that mountain top, suppose the young man had been willing to loan me a can of his cold Coke. I would have to pay him interest, of course, but it's entirely possible that I could have sold the Coke to another hiker at a premium price, then later purchased a can at the discount store and returned it to the young entrepreneur. Even allowing for the interest, I probably would have made money on the transaction. Short selling a stock works the same way.

In the stock market, short sellers have something of a bad reputation. They are often accused of spreading negative information about a company in order to push down its stock price but I believe the market is large enough for all. It provides investors the opportunity to bet on a company's value rising or falling and over a short or long period.

In making investment decisions for our clients, we review the possible outcomes carefully before acting. People tend to think of how much money an investment could make but we also consider just how much a client could lose. In the case of buying a stock, i.e. taking a long position for them, the most they can lose is what was paid for the stock. In the case of a short sale, however, the potential loss is unlimited, so it's a strategy we avoid. If the price of the stock keeps rising, at some point short sellers are going to have to buy shares to replace the ones they borrowed initially. This is known as a short squeeze. The higher the price goes, the more likely a short seller will be forced to give in and buy stock to "close" the short position. Of course, such additional purchases push the price higher, adding to the pressure on the remaining short sellers. If I somehow got stranded on the mountain and couldn't get back to sea level where the cheap soda was, I might have had to buy one of those now more expensive cans back in order to repay the young hiker.

This is basically what happened last week. Short sellers of GameStop stock believed that, even though it had already fallen from around $50 to around $4, it had farther to go. They borrowed and sold shares waiting for that to happen. When a popular blogger on Reddit's WallStreetBets forum shared the idea of teaching the short sellers a lesson, individual buyers poured into the market. Since many of the popular retail trading platforms have reduced commissions to zero, there was little friction as small orders were placed. The more "buy" orders, the higher the price and the more the short sellers were squeezed. Eventually GameStop's stock hit $483 per share (that actually might have been the perfect time to short it) before falling to around $90 as I write this article. No doubt it'll be less than $10 again before long.

Most retailers have done very badly during the COVID-induced recession. GameStop is among those getting little traffic so its sales are way down. Things may recover and retailers may become good long-term investments or they may all be candidates for shorting - only time will tell. What concerns me is the huge number of people who took an influencer's advice and "ganged up" on short sellers. We clearly prefer a rational stock market, not one blown around by whims.

Just to be clear, at WWA we are long-term investors working on behalf of our clients. We sometimes place hedges when we believe a market niche has become overpriced but our policy is to move thoughtfully and deliberately, always keeping our clients' long term goals in mind.