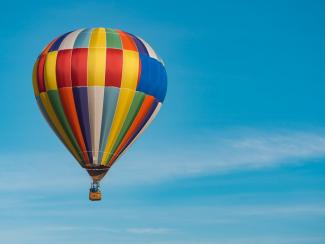 Up, Up and Away

"Up, Up and Away" is a 1967 song written by Jimmy Webb and recorded by the 5th Dimension. Although it did well on the charts, it’s been a while so let me remind you of the next few words: ‘in my beautiful balloon’.

I thought of the song as I was talking to a younger friend who graduated from college in 2009. When he went to work and began investing, he put money into the markets using an index-oriented mutual fund. In his investing lifetime, markets, like a balloon, have only gone up. That makes it pretty easy to understand why he and some others of his age believe that corrections are a historical anomaly so there’s no risk in chasing Tesla and other stocks higher. Or in buying Bitcoin since it apparently can’t lose value either or in “gaming the system” by forcing up the price of GameStop, specifically to punish those who believe it’s a poorly managed company in a dying industry.

In addition to the lack of any substantial market correction since 2009, I suspect there may be another factor at play. The online trading platforms offered by zero-commission brokerage companies resemble video games. By making investing appear familiar and fun, these companies have designed a product with built-in appeal to the massive audience of gamers – this same generation. In my thirty years of experience as an advisor, investing has proven to be more difficult than playing a game. For those who prefer investing to gambling, here’s an article in the WSJ which suggests various apps that may be helpful.

I have written several times about market bubbles, most recently last August. I’m not certain that’s the best description of what we see today but perhaps it will help frame our discussion. Our nation is coming out of an especially dark period having lost over 550,000 citizens to COVID-19. Yet following a brief correction last March, stock markets have gone up throughout the entire epidemic period. The regular arrival of new record highs is certainly comforting for all investors but this good news is accompanied by some concerns. According to the trade publication National Restaurant News, around ten percent of the restaurants in the country have closed – many forever. Other face-to-face businesses have also suffered, including bookstores and many travel-related entities: hotels, car rental agencies, airlines and, especially, cruise lines. Industries which have benefited from the shut-down? Real estate: both sales and repairs are up. Home fitness has largely replaced gym-based workouts. The technology of e-communications, especially our ‘new’ hero: Zoom.

Even with increased spending in those areas, those who continued to have income have been saving more than ever, so personal savings levels are at all-time highs. As those funds work their way back into the economy, the future should look ever more promising. Since the stock market is forward-looking, investors expect to be rewarded by investing ahead of a return to more normal times.

After purchasing a home, most investors must decide between stocks and bonds. Since the Federal Reserve continues its low interest rate approach, bonds have little appeal. Who would want to buy an investment paying less than the rate of inflation? So, much of the money which might have previously gone into bond purchases has been redirected towards stocks. This is another reason stock markets have done so well.

With the economy recovering and a lot of pent-up demand, what could go wrong? Why might my young friend be mistaken about the ever-upward movement of markets? Well, in Columbus, Indiana where I live, it’s getting hard to find help. One local restaurant’s sign isn’t offering specials, it’s advertising for kitchen help starting at $18 per hour. A wage that’s twenty percent higher than what labor activists are asking for is likely to draw some employees away from other establishments. As wages rise, prices tend to follow to allow for some profit to the owners. Those increases are a basic description of inflation – costs rising, purchasing power declining.

Whether through the erosive effects of inflation, another – perhaps even more serious – pandemic or something now unknown, I expect the market to correct before long. I expect the balloon to return to earth, at least reducing the paper wealth created since 2009. In fact, I imagine some of the highly ‘gamed’ stocks will fall the farthest. Of course, our clients have diversified portfolios which, we hope, will protect them from the worst of any pending correction.

Will the balloon keep rising indefinitely? Only time will tell.